It was another great weekend for exciting news, decent weather, an OSU victory and best of all visiting with other Stadium Alums! Our Annual Meeting was held pre-game on reunion weekend on Saturday, October 7, 2017. Thanks to everyone who arrived early on Campus to join us at our annual meeting upstairs in RPAC. The Stadium Scholarship Alumni Society (SSAS) received good news! The Ohio State University Alumni Association awarded the Stadium Scholarship Alumni Society 3 awards. These awards came with the extra bonus of some funds. These funds will help both our students and alumni in future events.

SSAS President, Kristy Mount, explained to the meeting attendees how events that our Alumni Society sponsors can be awarded additional funds for our Society to use.  Our Society was given an award for Alumni event of the year with our CAPES for KIDS. In March 2017, Stadium Scholarship Program (SSP) residents and alums made fleece capes for kids at Children’s Hospital.

Three students from the current program updated us on the many, many events in which they are involved. These events can take place in either of the 2 Scholar Houses or around campus. The students were excited to tell us about their upcoming trip in a couple of weeks to Chicago.

Board member, Doug Byers, is our board member responsible for interviewing and selecting the student winners of the scholarships that our Society awards to current residents.  He updated us on the $20,000+ we awarded to ten deserving students. These 10 students were selected out of a field of over 25 student applicants for the scholarships.

Kristy announced our big news for the coming year. 2018 is the 85th Anniversary of the Stadium Program! There will be a celebration on March 3, 2018 to celebrate the 85th anniversary of our beloved program. After, Kristy unveiled the 85 for 85 campaign, other Board members gave us more information about what to look for on our website (www.stadiumscholarship.alumni.osu.edu), our Facebook page (Stadium Scholarship Alumni) and in the mail.  We ended our meeting by drawing names for Amazon gift cards. 10 lucky Alums who were at the annual meeting won one of the gift cards.

We continued our Homecoming celebration downstairs in RPAC where the Stadium Alums attended the OSU Pre-Game Huddle Tailgate sponsored by the OSU Alumni Association.  The OSU Cheerleaders and Brutus stopped by to get us ready for the game as did OSU President Drake and OSU Athletic Director, Gene Smith.  Stadium Alums were there in numbers enjoying the food, beverages, photo booth and games set up for all. This event has been a favorite of Stadium Alums because it allows us to gather for some pregame fun that isn’t spoiled by weather and is a close, quick walk to the game. As we wrapped up the festivities, the large contingent of Stadium Alums took a group picture. The picture included one our favorite alums, Earl Todt.  We were so happy that he was able to join us and cheer for another Buckeye Victory, this time over the Maryland Terrapins with a score of 62-14.  Thanks to all who attended.

Go Buckeyes and see you on March 3rd for our 85th Anniversary Celebration! 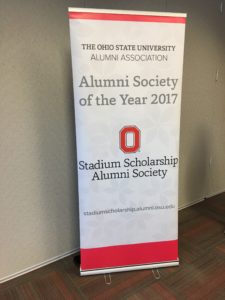 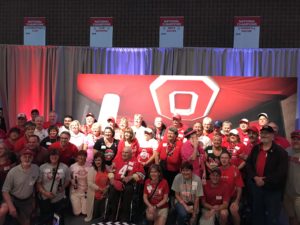 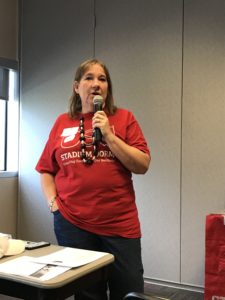 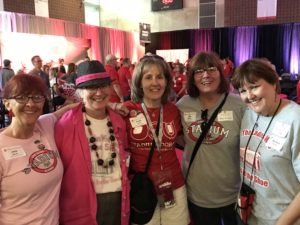 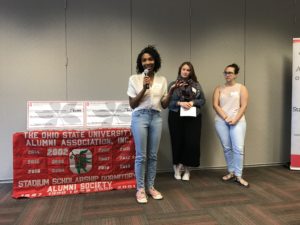 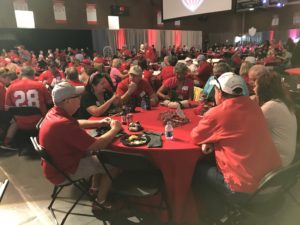 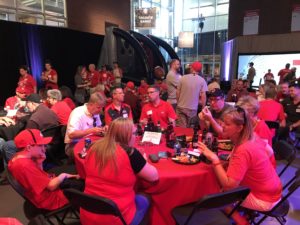 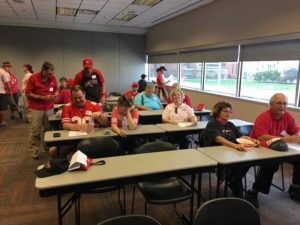 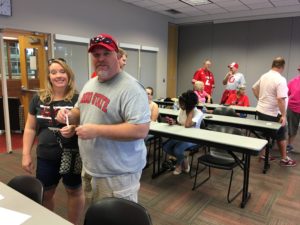 >>Back to the newsletter