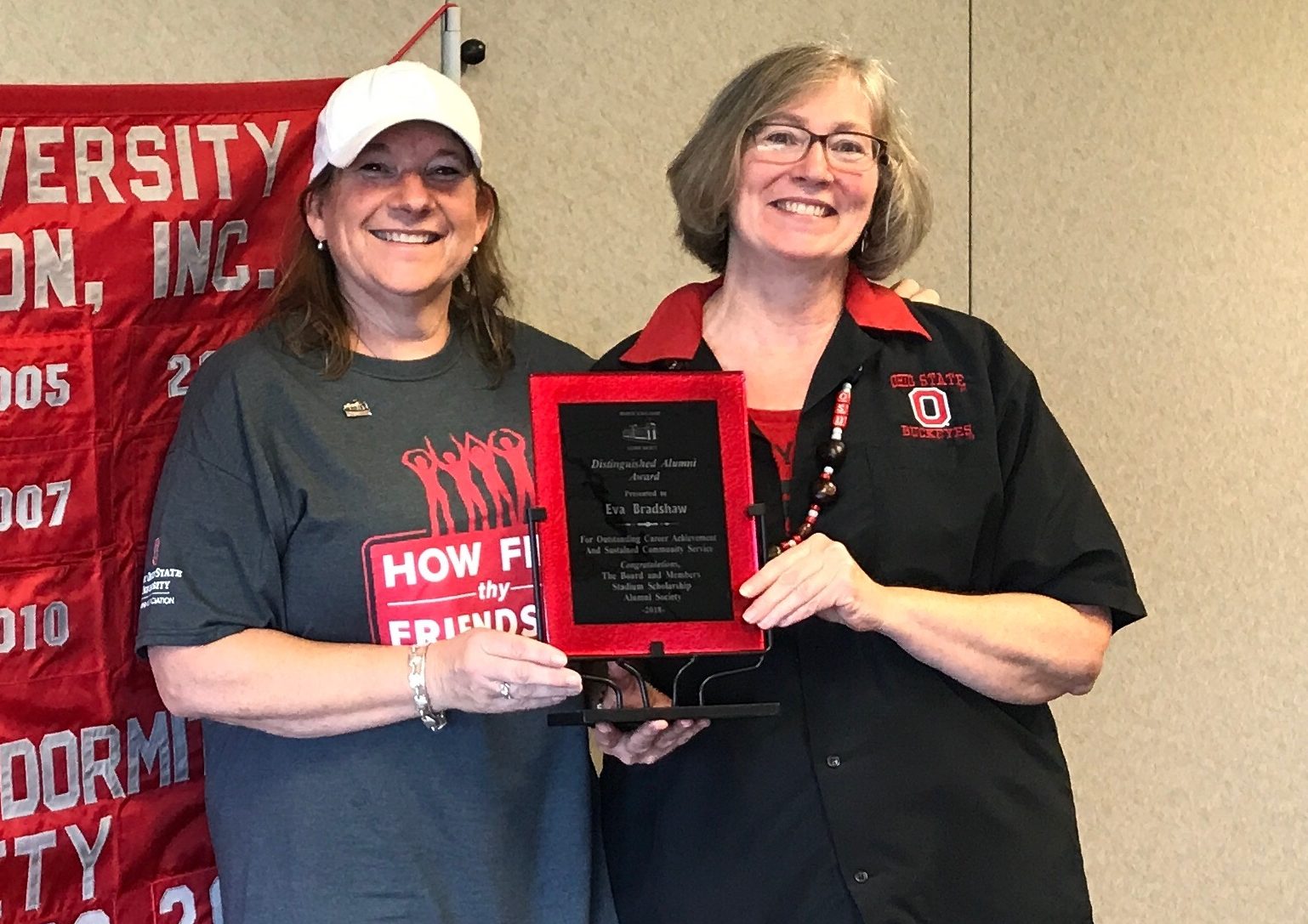 At the annual meeting of the Stadium Scholarship Alumni Society, Eva Bradshaw was named as the Outstanding Alumni for 2018.  Below read her nomination submitted by fellow alumni Kristy Mount.

Eva Bradshaw was a resident in the Stadium Scholarship Dorm in 1978-1979.  She earned both her BS and MS from Ohio State in 1982 and her MA from Ohio State in 2000.  Eva then began her professional career at The Ohio State University first in OSU Extension in both Columbus and Fulton County, Ohio.  She then returned to campus to lead informational technology staff in both the College of Education and Human Ecology and at the Fisher College of Business.  At the start of her career, PCs were just being introduced to the workplace she took on the challenge of learning new technology as it was developed and training her colleagues.  She was self-taught and became a leader in IT at a time where IT was emerging and when women were underrepresented in the field.  She was an expert and an advocate in educational technology and online learning.  Her ability to work effectively in a field that changes at an incredible pace is exceptional and she has turned this gift into a successful career and also her passion. 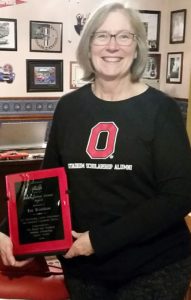 After 30 years, Eva retired from Ohio State and served as the director of online learning at Zane State College.  After a few years, she began her current job as a Regional Affiliate Manager for NCWIT (National Center for Women and Informational Technology).  In this job, Eva supports volunteer affiliate teams to locate and recognize young women while encouraging them to pursue computer science through an awards program, Aspirations in Computing.

Her current job allows Eva to formally do what she has been doing as a volunteer her entire adult life.  Eva has donated her time to mentoring young women in their IT careers and also has worked for years conducting an after-school computer club for girls at Weiland Park Elementary in the Columbus City Schools.

In 2006 she was recognized for this work when she was selected by the USA Freedom Corp to receive the President’s Volunteer Service Award.  This award was presented to her personally by George W. Bush.  This award is just one representation of the impact she has had on countless young women through her volunteer work and her professional life.  It is obvious that Eva loves sharing her journey in IT with others and thus encouraging them to reach their fullest potential.

Eva has also directed her talents toward the Stadium Scholarship Alumni Society.  She has been a longtime supporter of the society, serving on the board for six years and as president for one year.  She and her husband John regularly donate their time and money to the program. Very recently she was an important part of the committee that planned the 85th Year Celebration of the program.  She regularly attends SSAS events with the current students such as the Dinner for 12 Buckeyes.

Eva met her husband, John, while they were living in the Stadium Scholarship Dorm and they were married at Mirror Lake in 1982.  They have two grown daughters and a son in law, Audrey, Marie and Ross.  Eva is not only a devoted wife and mother but an amazing friend who makes time to help and support all those that she encounters.  I am honored to have the opportunity to nominate this successful, devoted and compassionate woman as she exudes the cooperative spirit of SSP and represents the ideals of the program so beautifully in her life.