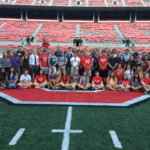 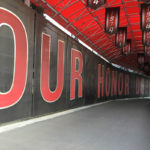 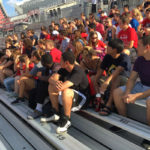 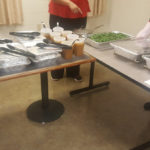 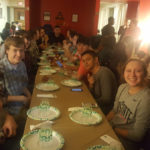 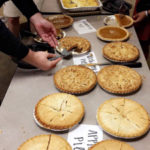 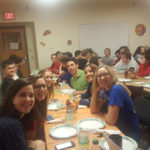 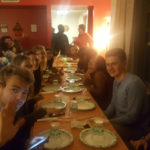 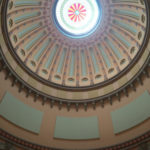 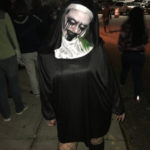 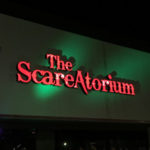 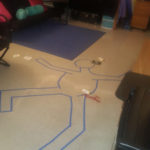 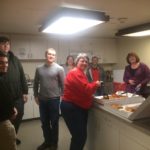 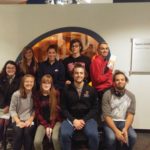 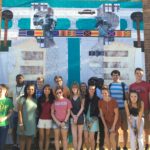 On Wednesday, December 7, the Stadium Scholarship Program Alumni came to Scholars East to join the students for the night and encourage them before finals. While enjoying a slice of pizza, the students were able to converse with each other, talk to SSP Alumni, and take a load off before entering finals week. The Alumni also surprised everyone with snack bags to help make the inevitable hours of study sessions to come more tolerable. On behalf of everyone in SSP the Student Alumni Committee would like to extend a big thank you to all the Alumni who came out and provided encouragement, tips, and snacks for all of the current students!

Volunteering at the library by helping them get ready for the Big Book Sale was a lot of fun! We took the COTA bus downtown to the Columbus Main Library and sorted through many genres of books. There were many interesting books and it was fun to simultaneously look at the books and help sort them into categories.. It was great to have the opportunity to give back to the community in a way that promotes literature, literacy, and reading!

Six students met with six Stadium Scholarship Program (SSP) alumni at the Longaberger Alumni House for a dinner hosted by the Student Alumni Council (SAC), which brought together roughly a dozen different alumni groups at OSU for dinner. The dinner started with a reception at 6:00 pm, and was a great informal setting for networking and conversations to engage with alumni and better appreciate what the program can do for you. There were laughs, eyebrow raises, and fun as a lighthearted night of entertaining discussion and casual dining took place.

SSP members jumped at the opportunity to start the year off with a commitment to service at Buckeye Ranch. Members were put to work with a lot of outdoor tasks such as pulling weeds, mulching and painting. It was a hot day of work, but the students were thrilled to help out such a fantastic organization. Buckeye Ranch is a safe haven for children with mental disabilities that works to restore hope for children and their families. SSP made a significant impact by doing beautification projects and were able to provide a few hours of service.

On Friday, October 21st, SSP took part in OSU night at COSI. Students were given a night to explore COSI and its many exhibits which covered subjects from underwater exploration, electrical and mechanical energy, space exploration, the progression of a town through over half a decade of technological advances, and even the nature of the human body. The night provided many opportunities for students to meet new people, make new friends, and learn about the world around them.

SSP’s first Explore Columbus Committee event had an amazing turnout, despite it being directly after the Bowling Green football game. We headed up to High Street and started our adventure! There are murals plastered on about 20 buildings stretching all the way to the Short North. Not only did the residents witness creations by contemporary local artists, they were also able to understand how OSU is truly a city university. We also visited galleries filled with  sculptures and great music. After attending Gallery Hop together many we had an impromptu dinner at Sloopy’s Diner to get to know one another better.

On Saturday, October 8th the service committee ran our High Street Cleanup. We met in Scholars East at 10 am and then waited a couple minutes for people to show up. Afterwards, we explained to people what we would be doing and passed out trash bags and latex gloves. We then departed for High Street via 10th Avenue – picking up trash along the way. Once we hit High Street, we headed north picking up trash until we filled our bags. Along the way, a gentleman stopped us to tell us that we were doing a good thing. It was fun to get to spend time with our friends in the program while also doing something helpful for our community.

On October 19th, Scholars West RA Japera Benson hosted a Murder Mystery Dinner where residents were tasked with figuring out who killed the President. Dr. Amelia Aldao and 3 of her graduate students also attended and participated.  In total 34 residents came and enjoyed a home cooked meal before participating in this interactive experience where everyone used clues and evidence to uncover the murderer. In the end, everyone had a great time and helped solve the mystery.

On September 9th, Scholars East RA David Kucia hosted Professor Lawrence Inks from The Fisher College of Business for his first faculty program of the year. Dr. Inks held a discussion about finding and pursuing your passions. Dr. Inks did a phenomenal job at engaging with the 43 residents in attendance. He facilitated an interactive dialogue about finding what you are passionate about and pursuing that in your professional career, as well as in your personal life. He also discussed the difference between learning and studying and how to effectively manage your time in order to obtain and retain knowledge. Dr. Inks did a great job relating to students and had numerous people stay after his dialogue concluded in order to talk with him further.

On a cold and spooky night in October, members of SSP along with other Hall Complex and Residence on Tenth students traveled to the famous ScareAtorium in north Columbus. On arrival, zombies and other living dead creatures were crawling everywhere. After a short wait, the group entered the haunted asylum and traveled through the dark corridors. The walls shook and screams were heard all around as the doctors “tended” to their patients. Students did their best to keep their calm despite some of the surprises that lurked around the corners, most were unsuccessful. A lot of scares and fun were shared during the trip; it was a perfect way to wrap up the month of October and get into the Halloween spirit.

Members of SSP got a chance to be formally welcomed to the program by the one and only Stadium Scholarship Alumni Society! SSPers got a chance to meet the alumni at the original home of the program, The Ohio Stadium (I know, sweet right?). The alumni introduced themselves, gave background on the history of The Stadium Scholarship Program, and talked about how far the program has come. But that’s not all, members of SSP also got an exclusive chance to walk on the football field! After many pictures were taken and Buckeye football was reimagined, SSPers returned home to dine with the alum where they got to hear stories of the program. History was learned, laughter was exchanged, and friendships were made.

On this sunny Sunday afternoon SSP took a tour of the historic Ohio Statehouse. Starting in what was called “the Crypt” of the statehouse,  Caitlyn, the tour guide, explained the origins of the construction of the building. Due to Ohio’s financial instability during the early 1800s, the Statehouse had to be built not only with free labor, but built with local materials as well. The free labor came from the local penitentiary, where prisoners were commissioned to begin- and later complete in 1866- construction. The materials used to build the Statehouse are abundant in Ohio. Bricks were made from mud and clay, and large slabs of limestone, filled with interesting fossils, then carved to create stairways and walls.

The Rotunda, with its beautiful tilework and stained glass state seal at the top of the dome, was the most beautiful room in the building. The walls were salmon pink throughout, and it was explained that back in the 17th century, pink was not its own color, but was considered a lighter shade of red, meant to instill power and respect to those who gazed upon it. A painting of “Perry’s Victory on Lake Erie (1813)” and a monument with a bust of President Lincoln in the Rotunda, are two of many commemorative and historical monuments seen throughout the Statehouse. Finally, the Atrium was toured. The Atrium is an indoor (once outdoor) area used to cross between the Senate Chambers and the main Statehouse. Events such as weddings and graduation parties have been held there throughout the years, and the room continues to help keep alive the rich history and importance of the city of Columbus and the historical Statehouse.

On the 6th of November, members of SSP as well as many alumni enjoyed a traditional Thanksgiving meal prepared by the Food Committee. The dishes that were offered included stuffing, mashed potatoes, corn bread, ham, turkey and an assortment of pie. In addition to the food, members of SSP got to spend a couple of hours in conversation with other members of their living community that they might not get to see very often. This element of the Thanksgiving Dinner is what makes being a member of the Stadium Scholarship Program such a unique and enriching experience.

On Tuesday, August 30th we hosted “Things I Wish I Knew As A Freshman” which was a question and answer panel featuring: Kevin Mo, an upperclassman in Scholars East, and former SSP members Ethan Oldfield, Frank Ferrato, Paul Kramer, and Victoria Colin. We asked them to share some wisdom with the incoming class of 2020. The Scholarship Committee chairs put together a list of the most common questions that freshmen have and allowed the panel to answer these questions and speak on some of their own experiences.  The event was a rousing success!