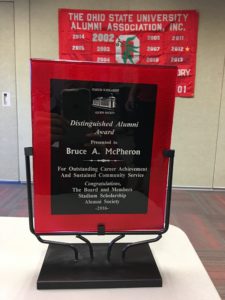 When Bruce McPheron returned to Ohio State to serve as the Dean of College of Food, Agricultural and Environmental Sciences in 2012 he was quoted as saying “This is a chance of a lifetime.  I’m going home.”  And coming home he truly was.  Bruce grew up in Hardin County, meeting his wife at the fair.  He came to Ohio State as an undergrad and lived in the Stadium Scholarship dorm during that time.  Fellow SSD alumni Frederick Scoles wrote to me that he, Bruce and a friend of his, Jeff Lehman also from Kenton, lived in section DD.  They were all on the top floor near the closed end of the stadium and Bruce and Jeff were known to be quite the practical jokers to all.  Bruce McPheron graduated in 1976 with a degree in entomology.  During this time Bruce would introduce himself as “a Buckeye and….a bug guy.”

After his time at OSU he headed to University of Illinois where he got his Masters and then PhD in biology and then entomology.   During that time he also returned for a few years to Ohio to serve as a 4-H agent in Clermont County for three years.

Bruce then joined Penn State in 1988 and rose through the ranks to become director of its Agricultural Experiment Station in 2002 then dean in 2009.  During his tenure at Penn State Bruce became known globally for his research in insect genetics, including developing new genetic tools for monitoring the spread of invasive fruit fly species. 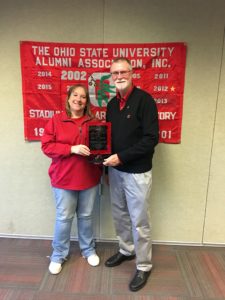 That was when Bruce came home.  November 2012 he became the Dean and then President Gee said he “brings a global view and worldwide experience back to Ohio to lead one of Ohio State’s most important education programs.  I am delighted that we have been fortunate enough to attract him back home.”

In 2015 President Drake also recognized Bruce McPheron’s abilities when he was named Interim Executive Vice President and Provost.  He said, “Bruce is a highly respected scholar, teacher and leader who has demonstrated a deep commitment to advancing the academic mission of the university and engaging with the community.”  When he moved into this job Bruce showed his dedication to education as he said, “I’ll have much to learn, to be sure, but the heart of the university’s mission is learning, so I’ll feel right at home in this process.

Then last year President Drake with the observation that “Bruce is a special type of leader who inspires those around him to always bring their very best effort.” named him to permanent Provost.  Bruce’s almost 20 years of leadership experience in higher education is a long way from the practical joker that lived in Unit DD of the Stadium Scholarship Dorm–but maybe not.  We can all be grateful for the experience and knowledge that we all acquired from the cooperative spirit of SSP and we can be proud of those that demonstrate this in their lives.  Bruce McPheron is one of those men and I would like to nominate him as Stadium Scholarship Alumni Society Outstanding Alumni Award for his Outstanding Professional Acheivement.